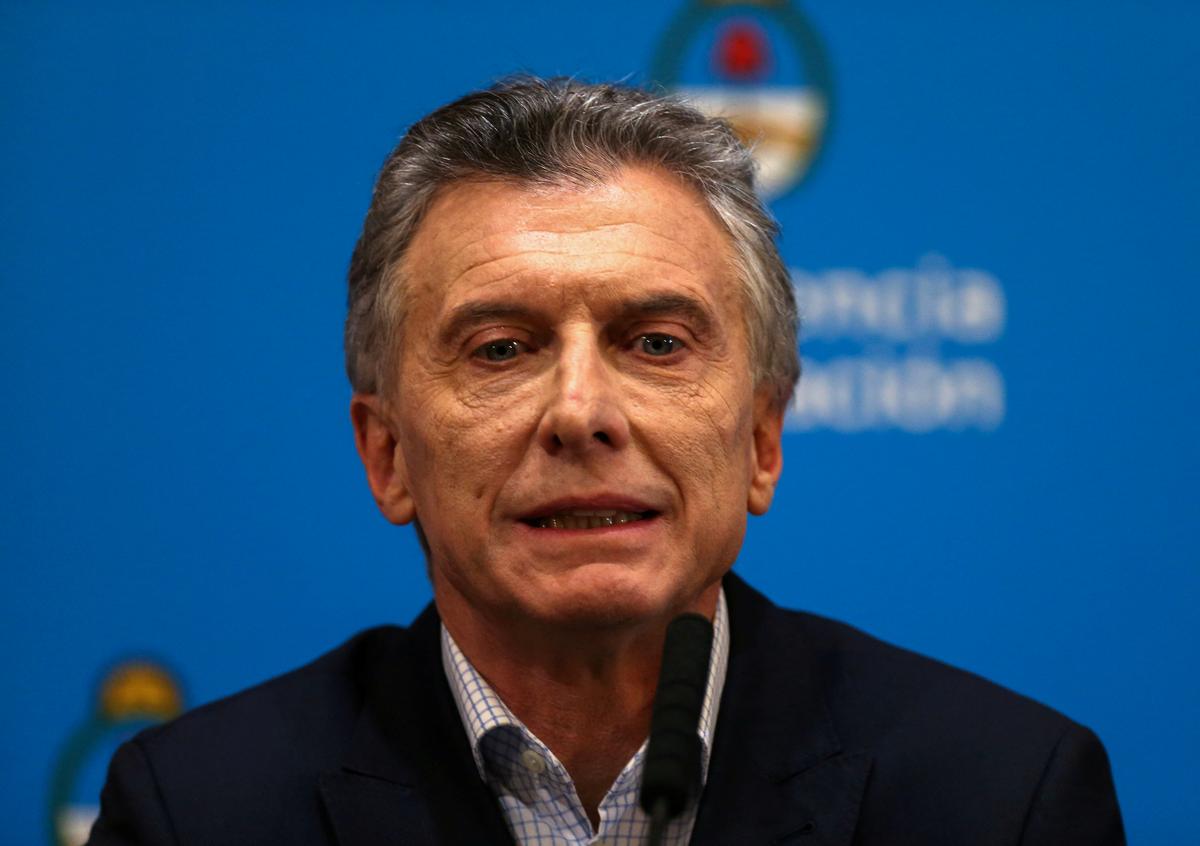 BUENOS AIRES (Reuters) – Argentine President Mauricio Macri on Wednesday unveiled a package of welfare subsidies and lower taxes for workers to lessen the impact of an economic crisis just months before a re-election bid, but his announcement did not immediately halt the peso currency’s collapse.

Amid signs that Argentines are already cutting back on buying goods due to a currency crash this week, the peso briefly plunged 12.3% more on Wednesday to reach 61 per U.S. dollar after Macri announced the measures. It later recovered to be down 4.77%.

It was the third consecutive day of heavy losses in the peso due to market concerns about politicians’ ability to drag Argentina out of another round of recession and high inflation.

Opposition presidential candidate Alberto Fernandez, whose victory in primary elections on Sunday was seen as the most immediate catalyst for the peso crash, warned that Argentina could run out of foreign currency reserves.

Facing likely defeat at the October presidential election, Macri said he would raise the income tax bracket floor by 20%, paving the way for a tax cut for two million workers. The tax break will be about 2,000 extra pesos ($34) per month per person.

The government will also give subsidy payments of 1,000 pesos per child for unemployed people with children before the end of the year and increase the minimum wage for the second time this year, although the size of the raise has not yet been determined.

Macri, a member of one of Argentina’s wealthiest families, came to power in 2015 on promises to kick-start Latin America’s third-largest economy via a liberalization wave but inflation is at 55%, the country is in recession.

Fernandez, a former cabinet chief whose running mate is President Cristina Fernandez, said the measures were too late and warned that the central bank could run of out foreign reserves as it tries to defend the peso, which has lost almost a quarter of its value in the last three days alone.

“Because of the seriousness of the situation, the risk is that we end up without reserves and that the Fund ends up turning its back on us,” the presidential candidate told El Destape Radio, referring to Argentina’s $57-billion standby agreement with the International Monetary Fund.

Macri suggested he would be open to meeting with the opposition but Fernandez said it did not make sense for him to hold talks with the president.

The peso currency was already struggling but it went into a nose dive after Fernandez heavily defeated Macri at the primary elections. The market fears a Fernandez government would bring back previous interventionist economic policies that have already been tried and found wanting in a country with a long recent history of economic crises.

“The measures I take and that I am going to share with you now are because I listened to you, Macri said in a video statement announcing his new measures.

He said gasoline prices would be frozen for 90 days as part of his plan. The new measures will cost the government about $678 million, the government said.

“These are measures that will bring relief to 17 million workers and their families,” Macri said.

Macri’s previous austere public spending policies were liked by the bond market but they have proven disastrous for his popularity among middle- and low-income Argentines struggling to pay electricity and heating gas bills that surged after the administration cut subsidies.

Sales of goods from cars to food and beauty products have slowed in recent days, as suppliers hold back shipments while trying to calculate how the weaker peso will affect consumer prices.

Gabriel Fernandez, general secretary of the Argentine Federation of Bakery Industries and owner of a bakery, said his flour supplier had warned him he would only sell a portion of what he usually provides because the mills had cut sales.

“They want to make decisions based on the new value of flour,” he told Reuters. “With the decrease in the value of the peso, they are trying to hold onto merchandise until the situation becomes more clear.”

The meltdown in Argentina’s currency, stocks and bonds on Monday was the worst since the South American country’s 2001 economic crisis and debt default.

The peso hit an all-time low Monday of 65 to the dollar, a drop of 30% before recovering partially.

Brazilian President Jair Bolsonaro said on Wednesday that Argentina was heading for chaos as “leftist bandits” who performed well in the primary election will follow the path of Venezuela, which is mired in a deep economic crisis.

Argentina’s Merval stock index was up 1.5% on Wednesday morning, after plunging more than 31% since the start of the week.

But in a sign that the market is more wary of holding Argentine debt, 5-year credit default swaps (CDS) were marked at 2,720 basis points, up from Tuesday’s close of 2,570 and well over double Friday’s closing level of 1,017, according to data from IHS Markit.

Argentina’s central bank had sold $198 million from its own reserves in an attempt to steady the peso by Wednesday afternoon, bringing its total sales in reserve dollars to $355 million this week.

The bank has about $66 billion in reserves, of which about $20 billion are free resources that it can used to pay debt and stabilize the peso, according to an Argentine government official.

Debt payments for the remainder of 2019 are estimated between $5 billion to $10 billion, depending on Argentina’s ability to roll over domestic Treasury bills, leaving the rest potentially to be used to intervene in the foreign exchange market.

There is about $27 billion in maturities in 2020, according to government data.