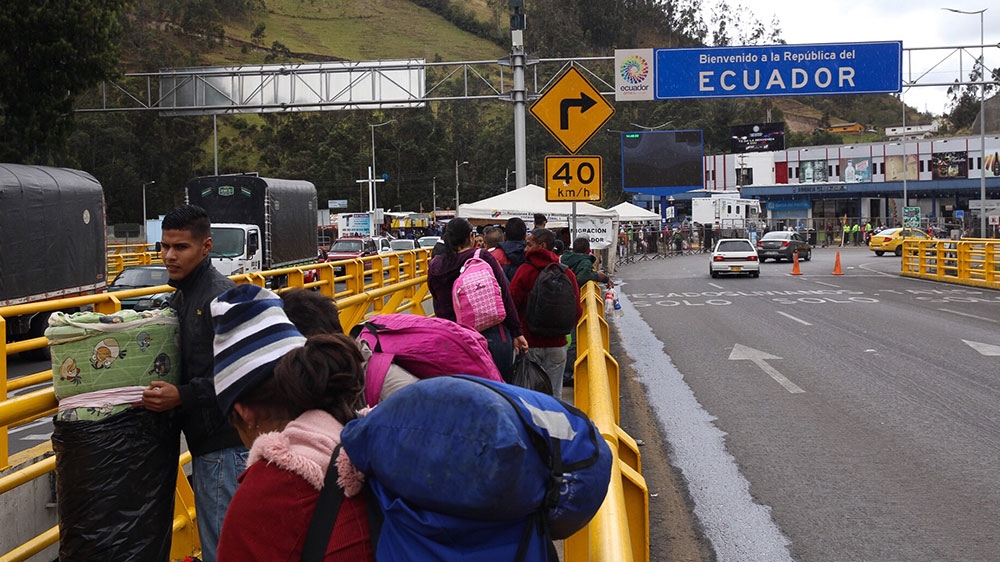 People walk on the Rumichaca International Bridge into Ecuador, where officials have noticed a spike in Venezuelan arrivals before the country’s new visa requirements take effect on Monday [Pu Ying Huang/Al Jazeera]

Rumichaca, Colombia – For months, Jose Amaya held out hope that his country would change. Even as his friends, family and neighbours abandoned Venezuela, with its hunger and violence, he refused to leave his home, his car and the only life he ever knew in the city of Maracaibo.

But earlier this month Ecuador, about 1,600km away, announced it would begin to require visas for Venezuelans from August 26, following similar moves by Chile and Peru. That was when Aymala, 54, concluded that time was running out for him and his three grandchildren.

»When we saw the news about the visa, we knew it was time,» he said as he waited amid thousands of his fellow displaced countrymen to cross Colombia’s cold and mountainous border into Ecuador while they still could. »We practically gave up hope in Venezuela.»

He echoed the feelings of many who stood wrapped in blankets beside heaped luggage at the border: Doors were closing to Venezuelan migrants while the political, economic and humanitarian crises that drove them from their homes only promised to deepen.

Amaya travelled with a group of 10 – neighbours and relatives, children and adults – who had gotten together and sold off a Chevy Malibu, AC units, furniture and a PlayStation to buy bus passes across Colombia to meet his 21-year-old son in the Ecuadoran capital of Quito.

He was among the more fortunate who waited at the border. Many with nothing to sell had arrived on foot from Venezuela to beat the Ecuadorian deadline. Others had left their country more than a year ago but struggled to get by in Colombia and turned up at the border in their latest attempt to find some means to survive.

«I don’t think even my family will ever believe what I’ve been through,» said Ronald Romero, 25, who wore slippers because he said a trucker who has picked him up hitchhiking had stolen his shoes, phone and the money he had saved to buy a bus ticket. «I’ve been hungry, tired, cold. I’ve cried plenty because I’m all alone.»

He left Venezuela six months ago but could not find work in Colombia, he said, so he planned to walk to find his sister in Argentina, more than 4,828km away.

About 4,500 Venezuelans have crossed this border daily since Ecuador announced the new visa requirement earlier this month, according to Jorge Pantoja, secretary of public safety for the nearby city of Ipiales. That is up from an average of between 1,800 and 2,200 Venezuelans a day before the announcement, he said.

Up to 7,800 Venezuelans a day could pass through this weekend as Ecuador’s deadline looms, he said.

That flood has prompted Colombia’s migration authority to expand services at the 24-hour border crossing between the two countries to cut down wait times, which can reach beyond 15 hours, so as to decrease the number of Venezuelans forced to spend the nights outside in this chilly city at 2,895-metre elevation, where temperatures after dark often dip to near-four degrees Celsius.

Nearly 500,000 Venezuelans have left Colombia via this border crossing since the start of this year, according to Colombian migration authorities.

The vast majority show up to the border without passports, which are nearly impossible to get in their country. They then apply for a special improvised ID on the Colombian side which gets them access to Ecuador. After the new visa rule takes effect on Monday, only Venezuelans with passports who have applied and paid for visas will be able to cross into Ecuador.

Nearly 250,000 Venezuelans live in the small mountainous country of 17 million people, which has recently seen rising tensions between Ecuadorans and immigrants. When discussing the possibility of new visa restrictions last month, Ecuadorian President Lenin Moreno said, «everything has a limit.»

One young couple, 31-year-old Dais Ojeda and 28-year-old Dargur Rodriguez, had spent two years living in eastern Colombia, near Venezuela, with their two children, aged six and eight. She sold coffee in the street and he worked in construction. But as the months went by, even more Venezuelans poured into the small Colombian city where they lived and work became harder to find. Every day they struggled to put food on the table until they began to realise they would have to move on.

When they heard that Ecuador would soon be closing to Venezuelans without passports, they left home and headed west, walking and hitchhiking with the kids for 10 days to reach the border.

They heard things were better in Ecuador. But they were not sure exactly where they would go or what work they might find.

«We’ll figure that out when we get there,» Ojeda said as she waited in line with her family at the border.

Nearby, 31-year-old Roni Blanco sat on the cold concrete rubbing his foot where it had worn through his sock in the pink foam slippers he wore.

For a year and two months, he has worked in several mechanic shops in the Colombian capital, Bogota. His goal was to save money to get his children and parents out of Venezuela, but each day his earnings went straight to food and rent. As more Venezuelans arrived he found himself frequently out of work, so he hiked eight days to this border before it closed.

«The idea is to get work and bring my family,» he said, sitting with two companions he met along way. «We don’t know what city we’re going to because we don’t know anything about Ecuador.»

Colombia has protested restrictive immigration measures in other South American countries as the continent grapples with a four million-person exodus from Venezuela, which the Organization of American States has predicted could hit eight million by the end of next year if nothing significant changes. The more countries that close their doors to Venezuelan migrants, the more will be stuck in Colombia, which shares a 1,900km border with Venezuela and hosts more Venezuelans than any other nation – approximately 1.4 million.

‘Venezuelans have no choice’

Humanitarian groups have warned that such restrictions will only drive the migration underground.

«It worries us that the new visa for Venezuelans may have negative impacts,»a spokeswoman for the UN refugee agency in Bogota told Al Jazeera. «In the experience of the UNHCR, measures to restrict access don’t necessarily create a decrease in the flow of migration, and instead can put people at risk using illegal border crossings controlled by delinquent groups.»

At the border, 30-year-old Yurima Gutierrez also doubted that visa requirements would stop Venezuelans from coming to Ecuador, recalling how easily she had entered Colombia through informal and unpoliced patches across the border.

Just two weeks before she had been laid off as a business administrator for a subsidiary of Venezuela’s decrepit state oil firm, PdVSA, and given a severance pay that allowed her to buy only four kilograms of flour. Nearly panicked, she realised the only way to feed her four children was to leave the country immediately, so she left the oldest two with relatives and took the younger ones across Colombia to Ecuador.

«You can’t stop Venezuelans from leaving because the Venezuelans don’t have any choice,» she said, huddled in a blanket with her two children among the throngs of her countrymen as night set at the border. «There is no future in Venezuela.»