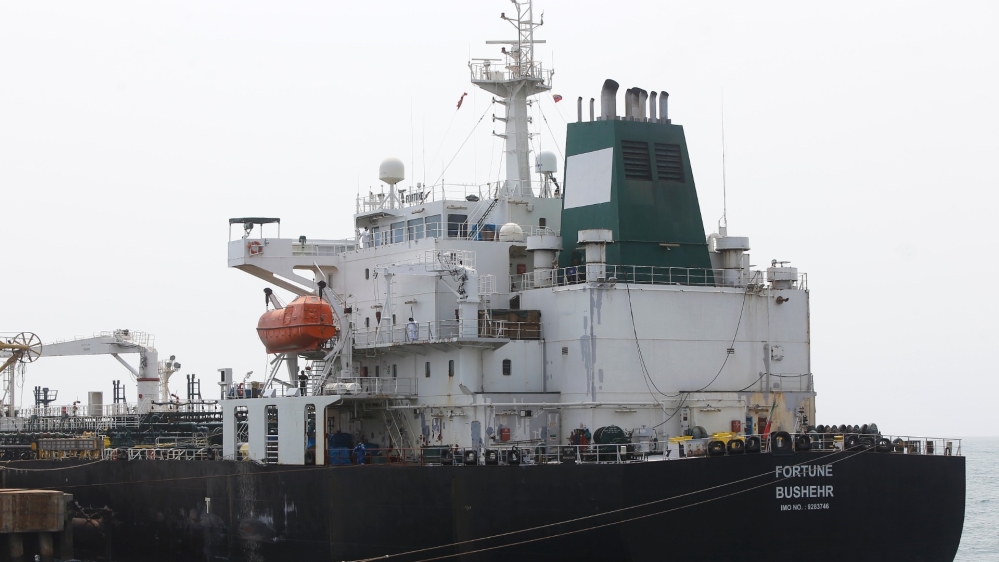 Iranian oil tanker Fortune was one the first of five tankers loaded with gasoline sent from Iran in May, Trump was angered by the flotilla’s arrival and sanctioned the ships’ captains [File: Ernesto Vargas/AP Photo]

US federal prosecutors are seeking to seize four tankers sailing towards Venezuela with gasoline supplied by Iran, the latest attempt to disrupt ever-closer trade ties between the two heavily-sanctioned anti-US allies.

The civil-forfeiture complaint filed late on Wednesday in the District of Columbia federal court alleges the sale was arranged by a businessman, Mahmoud Madanipour, with ties to Iran’s Revolutionary Guard Corps, a US-designated foreign terrorist organisation.

«The profits from these activities support the IRGC’s full range of nefarious activities, including the proliferation of weapons of mass destruction and their means of delivery, support for terrorism, and a variety of human rights abuses, at home and abroad,» prosecutor Zia Faruqui alleges in the complaint.

The Associated Press news agency reached out for comment to the Iranian mission to the United Nations but did not receive an immediate response.

The Trump administration has been stepping up pressure on ship owners to abide by sanctions against US adversaries like Iran, Venezuela and North Korea.

In May, it issued an advisory urging the global maritime industry to be on the lookout for tactics to evade sanctions like dangerous ship-to-ship transfers and the turning off of mandatory tracking devices – both techniques used in recent oil deliveries to and from both Iran and Venezuela.

The campaign appears to be working.

On Thursday, the US Treasury Department lifted sanctions on eight vessels that were recently found to have transported Venezuelan crude.

The move followed an auction on Wednesday of 100,000 barrels of gasoline seized from a Greek-managed ship whose owner suspected the cargo was heading towards Venezuela.

In May, Maduro celebrated the arrival of five Iranian tankers delivering badly needed fuel supplies to alleviate shortages that have led to days-long gas lines even in the capital, Caracas, which is normally spared such hardships.

Despite sitting atop the world’s largest crude reserves, Venezuela does not produce enough domestically-refined gasoline and has seen its overall crude production plunge to the lowest in more than 70 years amid the continuing crisis and fallout from US sanctions.

We are «two rebel nations, two revolutionary nations that will never kneel down before US imperialism,» Maduro said at the time. «Venezuela has friends in this world, and brave friends at that.»

The flotilla’s arrival angered the Trump administration, which struck back by sanctioning the five Iranian captains of the vessels.

The four tankers named in the complaint filed on Wednesday – the Bella, Bering, Pandi and Luna – are currently transporting 1.1 million barrels of gasoline to Venezuela, prosecutors allege.

Of the four, the Bella is currently sailing near the Philippines, ship tracking data shows, while the Pandi appears to have turned off its satellite tracking system on June 29 after having spent two weeks between Iran and the United Arab Emirates (UAE). The other two were last spotted in May – the Bering near Greece and the Luna sailing between Oman and Iran.

One of the companies involved in the shipment to Venezuela, the Avantgarde Group, was previously linked to the Revolutionary Guard and attempts to evade US sanctions, according to prosecutors.

An affiliate of Avantgarde facilitated the purchase by the Revolutionary Guard of the Grace 1, a ship seized last year by the United Kingdom on US accusations that it was transporting oil to Syria.

Iran denied the charges and the Grace 1 was eventually released. But the seizure nonetheless triggered an international standoff in which Iran retaliated by seizing a British-flagged vessel.

Venezuela’s President Nicolas Maduro speaks during a meeting with the ministers responsible for the economic sector at Miraflores Palace in Caracas, Venezuela [File: Marco Bello/Reuters]

According to the asset forfeiture complaint, an unnamed company in February invoiced Avantgarde for a $14.9m cash payment for the sale of the gasoline on board the Pandi. Nonetheless, a text message between Mandanipour and an unnamed co-conspirator suggests the voyage had encountered difficulties.

«The ship owner doesn’t want to go because of the American threat, but we want him to go, and we even agreed We will also buy the ship,» according to the message, an excerpt of which was included in the complaint.