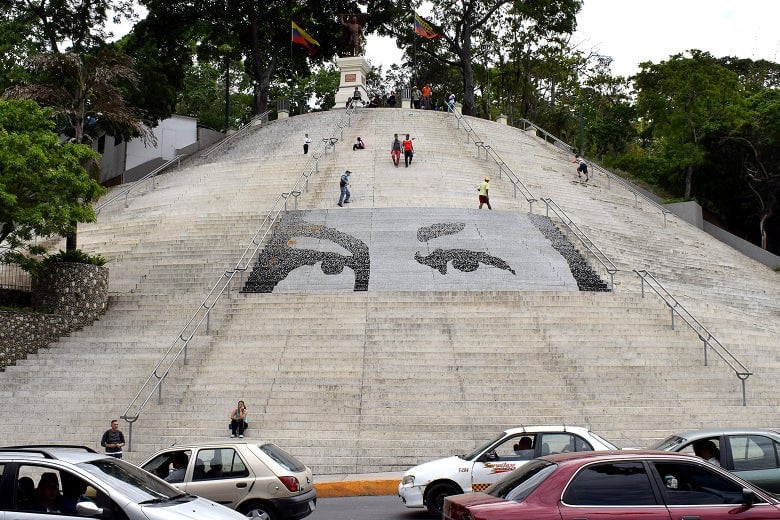 There are leftists on both sides of the barricades in the country’s political crisis.

Hugo Chávez’s eyes superimposed on a staircase in Caracas.

Chávez’s eyes watch over the city of Caracas.

Venezuelan “socialism,” for those outside the country, conjures up images of empty supermarkets, a starving population, and hyperinflation. And there’s some truth to the image. Venezuela has fallen spectacularly from being the richest nation in Latin America into an unprecedented economic crisis that has seen millions flee the country. This collapse comes during the self-proclaimed “socialist” revolution spearheaded by Hugo Chávez two decades ago and continued by current President Nicolás Maduro. There is, however, more to the story.

Perhaps no one knows this better than the country’s other socialists—those on the left who are not part of the ruling party, the United Socialist Party of Venezuela (PSUV), nor pro-government.

The left in Venezuela has many different movements and organizations, identifying as communist, Trotskyist, Marxist-Leninist, and various other related groups. A significant portion of them fiercely oppose the government. Some believe Chávez’s revolution was a farce, “socialism by name but capitalism in practice,” as René Cedillo of the Marxist-Leninist organization Bandera Roja (Red Flag) puts it. And there are those willing to go to great lengths—including putting their ideology to one side—to see the regime fall. While foreign coverage of the country often reduces its political divide to a socialist government putting down a pro-capitalist opposition, the truth is that there are red flags on both sides of the barricades.

“Venezuela is an interesting case study in left-right politics,” Geoff Ramsey, the Washington Office on Latin America’s assistant director for Venezuela, told me. “Even though [U.S. President Donald] Trump paints the crisis as a battle against socialism, most of the major opposition parties are Socialist International members, and espouse social democratic platforms.”

Nevertheless, for political groups to declare themselves full-fledged socialists has become taboo as a result of the regime, according to Ramsey and other analysts, meaning these represent a smaller slice of the opposition. “While they may support social democratic policies, Chavismo has made it difficult for any major opposition party to identify as socialist in Venezuela.”

One that does is Bandera Roja, a political organization that began as a guerrilla movement in the 1970s. Bandera Roja never believed in Chávez—nor that he was a socialist.

“We said Chávez was going to be a fraud” before he was first elected in 1998, says Cedillo. “Unfortunately for the country, history proved us right.”

At the time, Bandera Roja had accused Chávez of being too centrist in his politics and of potentially perpetuating old neoliberal policies, while rejecting a dialogue with their party.

Other socialists were not as quick to disavow Chávez. Even before coming to power, Chávez began uniting left-wing parties and organizations on his revolutionary platform, and continued to do so once in office. Many were unified under the PSUV in 2007. But eventually, some of these groups grew disillusioned with the movement and peeled off.

Zuleika Matamoros is a teacher and a member of the Marea Socialista, a left-wing political organization that was part of the PSUV until 2014.

“Even though we supported [Chávez’s government], we didn’t consider it to be a socialist government,” Matamoros says. She explains that even during his first presidential bid, Chávez was not campaigning on explicitly socialist policies.

Her organization, like others, respected Chávez’s popular revolution and hoped to eventually see it transform into a true socialist movement. But to the Marea Socialista’s frustration this did not happen, and it saw the PSUV become increasingly totalitarian and begin to descend into bureaucratic infighting. Now, it is in staunch opposition to the government.

“We’re the resistance to a process that was destroyed from within,” Matamoros says.

Others on the left, like union and teachers’ rights committee representative Dario Gómez, turned their backs on Chávez when his actions began contradicting his outward condemnation of “imperialism” (a socialist trope used frequently by Chavistas, or supporters of Chávez’s movement). Gómez’s breaking point was seeing Chávez let foreign multinationals continue to partake in the oil boom through a 2001 law. Chávez later expropriated large parts of the oil sector.

Many accuse Chávez of simply switching one set of “imperialist” chains for others as he courted support from other U.S. rivals. “We escaped our submission to the United States over 40 years [preceding Chávez], to submit ourselves to the imperialisms of China and Russia,” Cedillo says.

Those two nations have given Venezuela billions of dollars in unrepaid loans and have struck numerous business deals with the country.

An SOS flag flies above protesters at a July 2019 march in Caracas.

An SOS flag flies above protesters at a July march in Caracas.

Perhaps the deepest critique of the government by opposition leftists is its failure to protect Venezuela’s workforce—a cornerstone of socialist ideology—while violently suppressing public protests. The wages that state employees including teachers, police officers, and medics get per month can literally only buy a few items of food. At the time of writing, minimum wage had recently been increased—again—by nearly 300 percent, for a total of less than $5 a month.

Many Venezuelan leftists place the blame for this squarely at Maduro’s feet, especially after a 2018 memorandum that they claim reduced real salaries and violated workers’ rights.

Some have branded the government’s economic policies as capitalist, even “neoliberal,” as Cedillo puts it.

“The social sector or class that has most benefited from these 20 years of the Chavista regime is the financial oligarchy, the banking and imports sectors,” says Cedillo.

Ramsey believes there is some truth to this if corruption is taken into account. “There’s no question that Chavez was good for an unscrupulous few in the imports and financial sectors. The currency controls that began under Chavez contributed to widespread corruption,” he wrote in an email.

This fiery backlash against the government’s “fraudulent” socialism may come as a surprise. Especially given that many international observers—including Trump—have blamed Venezuela’s collapse on socialist economic policies and used them to criticize leftists elsewhere.

It’s true that Chavismo put in place several socialist-style reforms, such as the nationalization of big industries and a huge rise in social spending. However, this was accompanied by catastrophic mismanagement, overspending, corruption, and risky economic policies. Merely blaming the country’s current state on socialism doesn’t give the full picture.

Conservatives aren’t the only ones who oversimplify the situation. Oswaldo Pacheco, of the Trotskyist organization Socialism and Freedom Party (PSL), is unhappy about how the international left conflates socialism with Chavismo. “To the world … the left [in Venezuela] is Maduro and Chávez … they can’t put us all in the same basket,” he says. Pacheco believes that some organizations on the left continue to support atrocities happening in Venezuela in the interest of protecting their cause.

“Their pretext is that if Maduro falls, the right will take power. … It’s perverse,” he says. “That is to say, don’t resist [the regime] because there’s no chance of offering a better option than Chavismo, than Madurismo.”

Even within Venezuela, the left cannot escape the stigma of Chávez’s shadow.