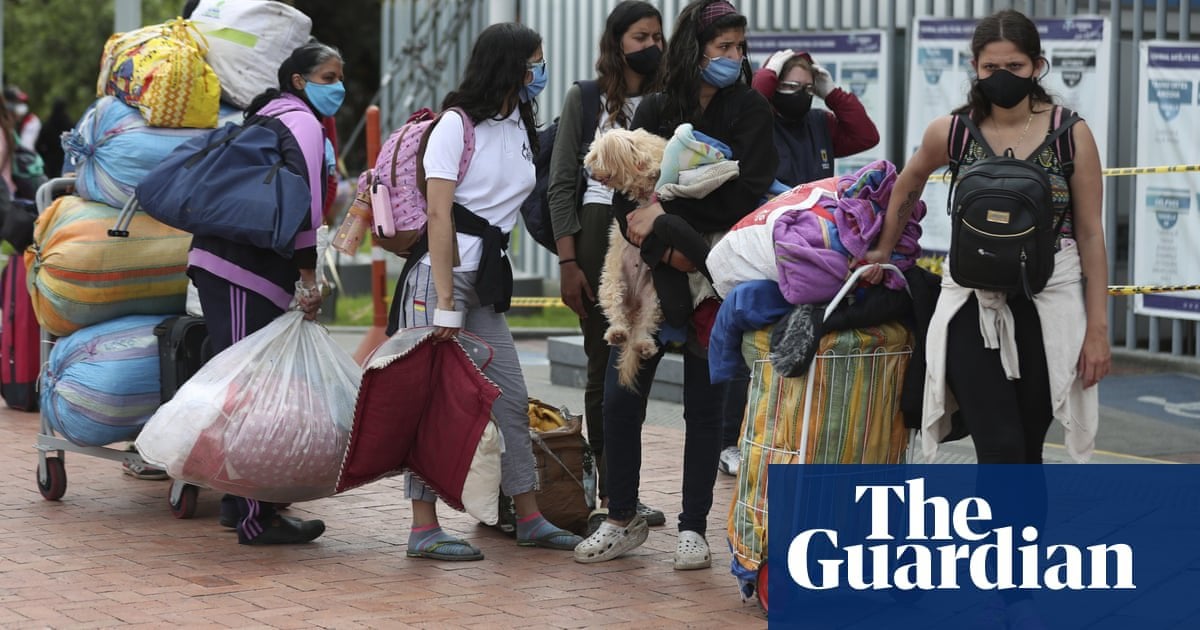 Rosa Vera, a 40-year-old from a small town in crisis-ridden Venezuela, thought moving to Colombia would give her the chance to find work. Five months ago, she left her family and began the arduous journey to Bogotá, the Colombian capital, to look for a job.

Instead, as coronavirus shut down economic life in the city, Vera and more than 400 Venezuelans had no choice but to camp out for a month, waiting for help to get them home.

“I left Venezuela because the situation was so bad that I couldn’t feed my family,” Vera says, as cars whizz along the highway that cuts through the impromptu camp. “I never thought that here I wouldn’t be able to feed myself.”

Venezuela, despite having the largest proven oil reserves on the planet, is mired in economic and social ruin. Hyperinflation is rampant, rendering the currency, the bolivar, practically useless, while food shortages are a daily reality.

More than 4 million Venezuelans have now left, with about 5,000 crossing into neighbouring Colombia each day at the end of last year, according to data from the UN High Commissioner for Refugees (UNHCR). Nearly 2 million live in Colombia.

But now, with lockdown shuttering businesses and keeping customers away, there is little work for Venezuelans such as Vera. Unable to pay rent, she was evicted from the house she shared with other migrants in the south of Bogotá. She has spent the past month camped outside a bus terminal on the northern outskirts of the city. Vera, like the 430 others here, would rather be home in Venezuela, where at least shelter is guaranteed. “I can knock on doors but if there’s no work, what can I do?” Vera asks, as she washes her clothes in a stream. “Going home is the only option I have.

“The dream is to get home and get a roof over my head,” Vera says. “With a little help from God, I’ll get there.”

Last Thursday morning the city began bussing the migrants towards the border. Between rain showers, hundreds of hungry Venezuelans packed up their tents and queued for buses.

José Gregorio Fuentes, 56, from Venezuela’s western Portuguesa state, was among the stranded migrants who set up the makeshift camp in late May.
Now, with his wife, he helps the other residents.

“Keeping the place clean and sanitary is our priority, because just one case of the coronavirus would spread like wildfire,” Fuentes says, wearing a face mask like most in the camp.

Responsibilities in the camp were divided between a handful of leaders including Fuentes. Some supervised food distribution or helped repair the makeshift latrine, others kept a census or gave religious sermons. Police kept watch outside.

Locals occasionally donated food from the windows of their cars, while NGOs – including the Norwegian Refugee Council and the International Rescue Committee (IRC) – told residents how to limit the risks of contracting Covid-19 and helped with onward journeys. The IRC sporadically provided hot meals.

“The health risks for those in the camp were multiple: the cold, the dampness, the rain, all of this makes them more vulnerable to a respiratory disease,” says Marianne Menjivar, the IRC’s representative in Colombia. “It really is an unfortunate situation and one that you don’t want any human being to be in during a pandemic.”

No resident has shown symptoms of Covid-19, though outside the two ditches that border the camp, cases are skyrocketing. Colombia, despite months of lockdown, is seeing infections jump at record rates, recently passing 4,000 daily confirmed cases for the first time. This week, the country passed 100,000 cases.

But for many at the camp, the pandemic is low on their list of concerns.

“Get me back to Caracas, then I’ll worry about getting sick,” says Vilmara Lopez, 54, who has been living in the camp for three weeks.

Juana Leiva, 70, arrived in Bogotá in late February with her family. “I’m taking each day as it comes, trying to stay healthy until I can get home,” she says, sitting in front of her tent as one of her infant great-nephews plays around her.

Colombia’s migration agency has reported that daily entries from Venezuela have been cut by 80%, and that more than 71,000 have returned to the country, where they face a strict quarantine in squalid conditions on arrival.

When the lockdown came into effect in late March, someVenezuelans began trekking home across the Andes. But most are relying on city officials to help them get to the border.

“Each night I pray and think of my country,” says Vera, ringing out ditchwater from her clothes. “Soon I will be back there.”