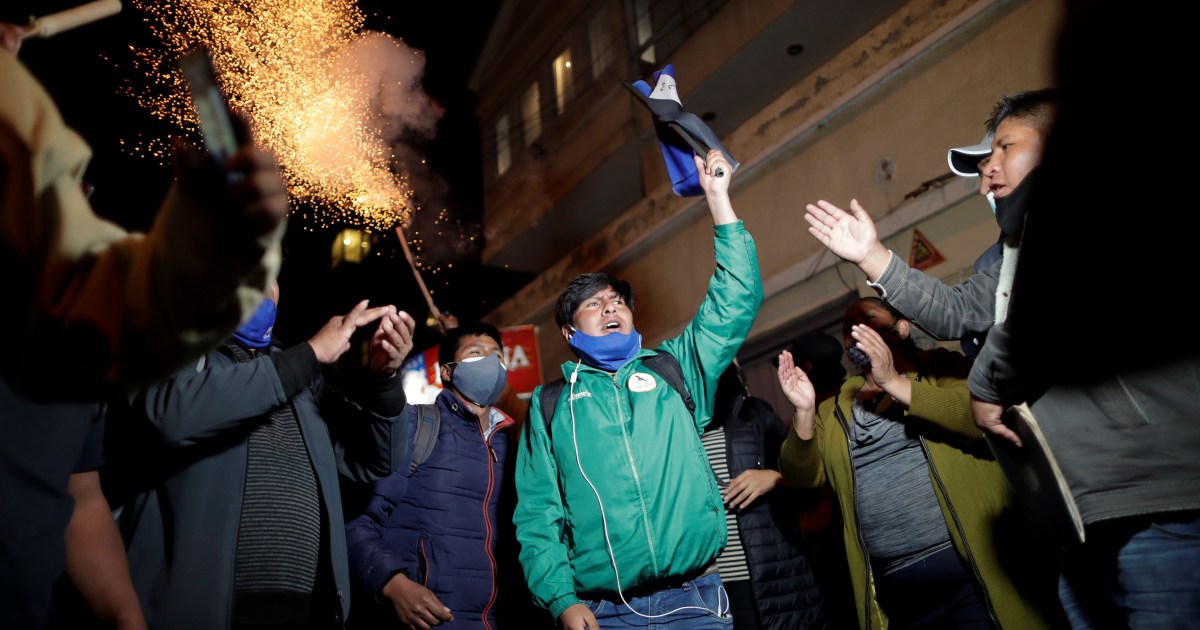 The result, which was a vindication to Evo Morales’s MAS party, also gave majorities in both houses of Congress.

Leftist leader Luis Arce promised to “rebuild” Bolivia in the wake of a tumultuous year scarred by political turmoil and the coronavirus pandemic, after securing a landslide victory in the Andean nation’s presidential election.

The Supreme Electoral Tribunal announced on Friday, Arce won 55 percent of the votes against six rivals on the ballot, easily avoiding the need for a run-off, and providing vindication for the Movement Towards Socialism (MAS) party of former President Evo Morales who was ousted last year and now lives in exile.

“Now our great challenge is to rebuild our homeland in peace, to regain joy, stability and hope for a better tomorrow for all Bolivians,” Arce said on social media in response to the final result, with a video of his support around the country.

“We won’t let down the trust that people have placed in us.”

Salvador Romero, the head of Bolivia’s electoral authority, said in a press conference late on Friday that there had been a huge turn-out despite COVID-19.

Luis Arce has promised to “rebuild” Bolivia, following his landslide win in the country’s presidential election [File: Juan Karita/AP Photo]“With 88 percent participation, Bolivians set the second highest record in our history and one of the highest in Latin America in the 21st century,” he told reporters.

“This affirms how people want to live in peace and with institutions that fulfil their mission, and rejected the ominous predictions of confrontation and violence.”

Conservative Luis Fernando Camacho, one of the leaders of the protest movement that helped drive Morales out of the country a year ago, received only 14 percent of the vote.

“The election is done,” Mesa wrote on Twitter. He added his congratulations to Arce for the win, which had been clear since the start of the week, but not officially confirmed.

Opposition members taking part in a protest against Luis Arce’s victory, in La Paz, Bolivia [Juan Karita/AP]“We will remain vigilant in the democratic opposition fulfilling the mandate of the people,” Mesa added.

MAS also won majorities in both houses of Congress, although the party fell short of the two-thirds majorities it would need to modify the constitution without consent by opposition parties.

Arce served as economy minister for a dozen years under Morales, Bolivia’s first Indigenous president, and is credited with fostering the country’s boom years from the mid 2000s when poverty was sharply reduced.

Since winning the election, Arce has downplayed speculation of a major role in his administration for Morales, whose popularity was tarnished in his final years as president by his refusal to accept term limits and by a sense of growing authoritarianism.

The political convulsion that preceded and followed Morales’s resignation – at the prompting of the military – led to at least 36 deaths.

The new election was organised by a revamped electoral tribunal under a deeply conservative interim government that had tried to reverse many of Morales’s economic, cultural and foreign policies. It suffered economic setbacks in part due to the COVID-19 pandemic.

Morales, who faces a series of charges lodged by the interim administration, was barred from seeking office. He has been living in self-exile in Argentina.

There were reports on Friday that Morales had flown to Venezuela, but would return to Argentina on Sunday.