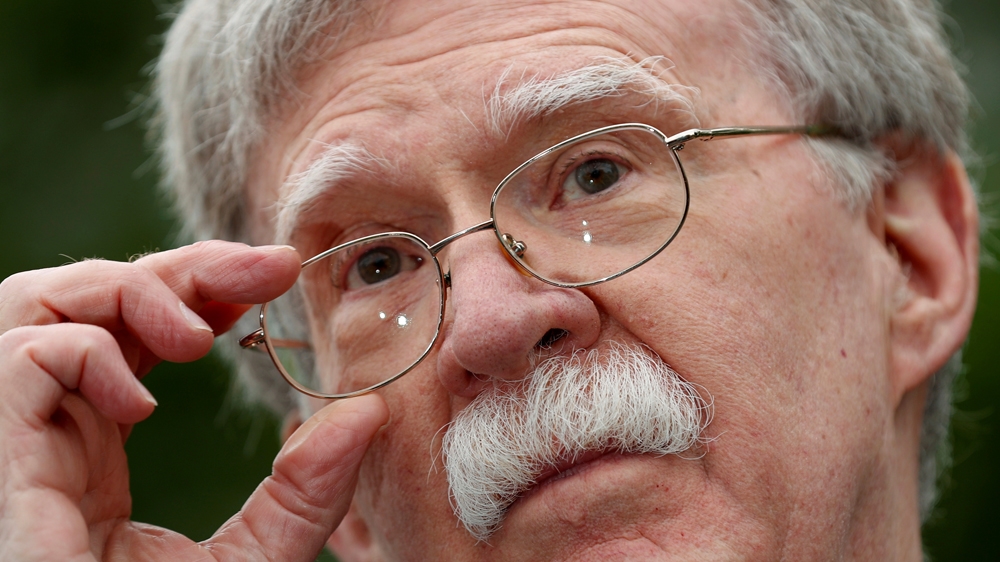 John Bolton is out.

US President Donald Trump announced on Tuesday that he had fired his national security adviser, saying they «strongly disagreed» on major issues.

Bolton disputed Trump’s version of events, however, saying he resigned.

Regardless of how it happened, Bolton, a leading foreign policy hawk, is now out of the administration.

Bolton took over the role of national security adviser in April 2018. He was a surprise pick at the time, with a world view seemingly ill-fit to the president’s isolationist «America First» pronouncements.

Trump had sometimes joked about Bolton’s image as a warmonger, reportedly saying in one Oval Office meeting that «John has never seen a war he doesn’t like».

Prior to becoming Trump’s national security adviser, Bolton was a Fox News commentator. He served as the US ambassador to the UN from August 2005 to December 2006 and undersecretary of state from 2001 to 2005.

As Bolton departs the Trump White House, here’s a look at where he stood on key issues and what his departure may mean for the future of US foreign policy.

Bolton had opposed a recent State Department plan to sign an Afghan peace deal with the Taliban, believing the group’s leaders could not be trusted. That opposition pinned Bolton against Secretary of State Mike Pompeo.

Bolton, who was reportedly excluded from some White House meetings about Afghanistan, strongly opposed Trump’s now-scrapped notion to bring Taliban negotiators to Camp David last weekend. Trump has since declared the US-Taliban talks «dead», citing a Kabul attack by the Taliban that killed 12, including one US soldier.

Senator Lindsey Graham, who was travelling with Trump on Monday, said reports of Bolton’s dissent on the Taliban meeting was a «bridge too far» for Trump.

Bolton was a chief architect of Trump’s strident stance against Iran, but there were apparent disagreements over Trump’s willingness to possibly meet Iranian President Hassan Rouhani.

Bolton had spearheaded the US abandonment of an international nuclear deal with Iran and reimposition of US sanctions on Tehran.

Bolton was widely believed to have favoured a planned US air strike on Iran earlier this year in retaliation for the downing of a US surveillance drone, an action Trump called off at the last minute. Trump has since expressed a willingness to talk to Iranian leaders under the right conditions.

Trump speaks during a meeting as Pompeo and Bolton look on in the Oval Office of the White House [File: Jonathan Ernst/Reuters]

But one Republican familiar with the disagreements between Trump and Bolton said the adviser’s opposition to a possible meeting between Trump and Rouhani was a precipitating factor in Bolton’s dismissal, the Associated Press reported. French President Emmanuel Macron has been trying to broker such a meeting, possibly on the sidelines of the upcoming UN General Assembly, in the hope of salvaging the international Iran nuclear deal that Trump withdrew from.

After Bolton’s firing, an adviser to Rouhani said his dismissal pointed to the failure of Washington’s «maximum pressure strategy» against Iran.

«The marginalisation and subsequent elimination of Bolton is not an accident but a decisive sign of the failure of the US maximum pressure strategy in the face of the constructive resistance of Iran,» Hesameddin Ashena tweeted.

North Korea was another issue upon which Bolton and Trump disagreed.

US officials have said it was Bolton who was responsible for the collapse of a summit in February between Trump and North Korean leader Kim Jong Un in Hanoi by recommending the presentation a list of hardline demands that Kim rejected.

In June, Bolton travelled to Mongolia while Trump headed to the demilitarised zone between North and South Korea to shake hands with Kim. Analysts said the move suggested a growing divide between Bolton and Trump over holding talks with Pyongyang.

Even before taking over as national security adviser, Bolton said that he thought talking to the North Korean leadership would be fruitless.

It’s important to stand behind our South Korean allies, but if we pay heed to the lessons of history, talking to #NorthKorea would be fruitless.

Trump and Bolton also disagreed about May missile launches by North Korea, with Bolton saying there was «no doubt» the tests violated UN sanctions.

Following those tests, however, Trump said on Twitter «North Korea fired off some small weapons, which disturbed some of my people, and others, but not me». Many believed Trump was referring to Bolton.

One of the issues Bolton was mostly in line with Trump was China‘s role on the international stage.

Trump and Bolton especially agreed on China’s role in the global market, accusing China of stealing US intellectual property and pursuing «mercantilist policies in what is supposed to be a free-trade environment».

In a 2018 interview with NPR, Bolton said the US «should not turn a blind eye when states, as a matter of national policy, are stealing intellectual property from their competitors'».

Bolton made clear during a news conference that Washington did not approve of the deal, saying «we laid out our concerns about … unfair Chinese trade practices, threats to national security we’ve seen in the United States.»

Bolton was a main player during the June 2019 workshop in Bahrain during which the US discussed the economic part of its proposals for solving the Israeli-Palestinian conflict.

The Palestinian leadership boycotted that workshop, saying the US cannot be an honest peace broker.

Following the boycott, Bolton criticised the Palestinian leadership, calling the refusal to appear a «mistake».

«What makes this particular proposal – which is being rolled out in pieces and slowly – the thing that makes it unique is the economic aspect of it,» Bolton said in what the Trump administration has called the «deal of the century».

«The prospects for Palestinians, for Israelis, and for everyone in the region, if we could find an acceptable agreement between Israel and the Palestinians, is incredibly bright,» Bolton said.

During that same event, Bolton also commented on a potential Israeli annexation of the Jordan Valley in the occupied West Bank, a plan that was announced by Israeli Prime Minister Benjamin Netanyahu mere hours before Bolton’s departure.

Bolton in June refused to give his outright support to annexation, but said, «Israel is entitled to live within secure frontiers».

«How that works in terms of specific aspects for the West Bank generally, that will be the subject of discussion that will follow the rollout of the peace plan,» he told reporters at the time.

Prior to becoming Trump’s national security adviser, Bolton had praised Trump’s recognition of Jerusalem as the capital of Israel and the decision to move the US embassy to the city.

He wrote on Twitter in December 2017: «The Middle East peace process has long needed clarity and an injection of reality, and Trump has provided it by making the decision to move the US embassy in #Israel to #Jerusalem.»

Bolton was also against Trump’s insistence that Moscow be allowed to rejoin the G7.

Bolton was an ardent opponent of arms control treaties with Russia. He was instrumental in Trump’s decision to withdraw last month from a 1987 accord that banned intermediate-range missiles because of what Washington charged was Moscow’s deployment of prohibited nuclear-capable cruise missiles, an allegation Russia denied.

Bolton was also outspoken about Russian meddling in the US elections.

In a February 2018 speech, less than two months before he became national security adviser, Bolton called the Russian attempts to influence the 2016 presidential elections an act of war.

«Attempting to undermine America’s constitution is far more than just a quotidian covert operation. It is, in fact, a casus belli, a true act of war, and one Washington will never tolerate,» Bolton told graduates at the Daniel Morgan Graduate School of National Security in Washington.

«We should respond in cyberspace and elsewhere. I don’t think the response should be proportionate. I think it should be very disproportionate. Because deterrence works when you tell your adversary that they will experience enormous cost when they impose costs on you. That causes them to say we’re not even going to think about it,» Bolton said about a possible response to Russia’s meddling.

Bolton, however, dismissed allegations that Trump’s campaign colluded with the Kremlin.

Bolton advocated against Trump’s decision last year to pull US troops out of Syria.

He masterminded a quiet campaign inside the administration and with allies abroad to convince Trump to keep US forces in Syria to counter the remnants of the Islamic State of Iraq and the Levant (ISIL or ISIS).

The US backs opposition leader Juan Guaido, who invoked the constitution earlier this year and declared himself interim president, calling Nicolas Maduro 2018 reelection «illegitimate». Maduro accuses Guaido and the US of attempting a coup.

In January, Bolton held a notepad with a handwritten line that read, «5,000 troops to Colombia».

Bolton repeatedly said that «all options were on the table» when it came to Venezuela.

«We are sending a signal to third parties that want to do business with the Maduro regime: proceed with extreme caution,» Bolton said.

His comments came a day after Trump signed an executive order that freezes the assets of the Venezuelan government and bans any transactions with it, an act that could ensnare its dealings with Russia and China, as well as with Western companies.

According to the Miami Herald, White House officials said on Tuesday that the president was frustrated that Maduro had not stepped down as Bolton had predicted. The Herald added, however, that officials warned that US policy towards Venezuela was not likely to drastically change with Bolton out of the picture.